Clue #3: One of the stars of this month's movie agreed to appear in it's sequel in order to finance a romantic-drama. (That rom-drom was directed by someone who's primarily an actor and has only directed a handful of films, including another successful 90s romantic-drama.)

There are so many good movies and shows out right now, here's a list of things I want more people to see, in no particular order.

The Good Place: This is easily my favorite show of recent years. Not only is it incredibly funny and good spirited, it also examines philosophical and moral questions from many different perspectives in every episode. Skip Intro explains best why this show is singularly amazing, so if you want more (spoiler free) reasons to watch this one, give their video here a watch.


Parasite: This movie has so much buzz around it right now it's tempting to write it off, but please don't give into that temptation. I have yet to talk to anyone who didn't love this movie, even people who've only watched it recently as part of their Oscar movie binges! The less you know about this one the better, so watch it while you can still go in with a blank slate. 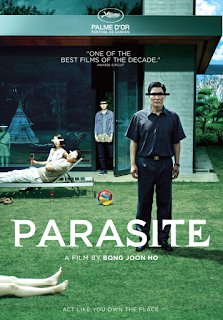 Knives Out: As I mentioned in my Murder, She Wrote post, I really love this movie. On it's surface it's an excellently crafted who-done-it. One layer down it's a commentary about the current power shift happening in western society. One more layer deep it's about the reactions of western society to that power shift. (It's also easily read as a commentary on the various reactions to Rian Johnson's Star Wars installment, but if you only read it that way, you're missing out.) As a person who loves who-done-its, this one now tops my list of favorites in this genre (second to Clue if you're wondering), as it's honestly a masterpiece on many levels.


VHYES: This one's hard to explain, but if weird-heartwarming stories told through non-linear narratives are your bag, find a way to see this one!


Things I still need to watch but I'm certain I will enjoy: Jojo Rabbit, the final season of Mr. Robot, and all of BoJack Horseman. 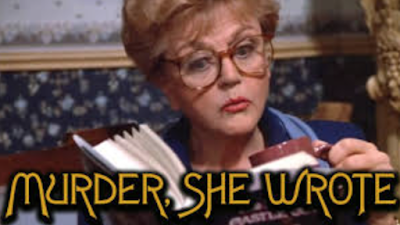 After watching Knives Out (which we highly recommend), I was struck with the understandable desire to re-watch one of my favorite shows from my childhood: Murder, She Wrote. And although I've gotten through almost 4 seasons, I haven't been giving each episode my full attention, but my love for this weird little show is fully reignited. There are numerous reasons to watch this campy classic; it's cheesy, demands you suspend a significant amount of disbelief, is packed with wild late 80s early 90s fashion, there's a cross over with Magnum PI, and the ever-strange reasons for Mrs Fletcher to get involved in each episode's murder case (never mind that she's also always within arm's length of a murder...). But the best reason to watch this show is by far the guest stars. Because of the show's who-done-it structure, each episode revolves around a sizable ensemble cast, allowing each episode to be filled by actors at the beginnings and ends of their careers (which also makes for some especially fun scenery-chewing moments). Here is just a sample of some of the guest-star combos that I've come across in just the first four seasons: 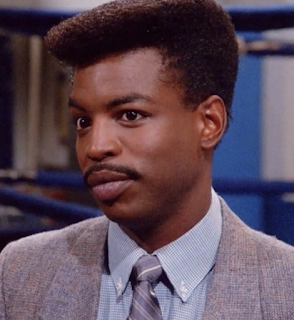 LeVar Burton was one of my favorite finds while re-watching so far. The episode he's in ("Death Takes a Dive") features John Amos (Coming to America), Ernest Borgnine and Adam West. (It's also one of the six episodes featuring Jerry Orbach as the character Harry McGraw, but more about that further down the list.) 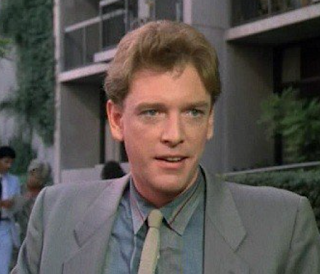 William Atherton appears in multiple episodes, the first of which was just after he appears in Ghostbusters, the next one just before he appears in Die Hard, and the last is just after Die Hard 2 came out. I've only been lucky enough to see two of his appearances so far, but each are wonderfully cheesy in their own unique way. 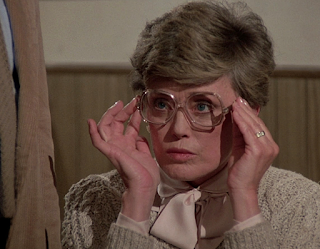 Rue McClanahan only appeared in one episode (likely because Golden Girls got picked up the very next year), but her episode is among the best of that season featuring Tom Bosley's reoccurring sheriff character, along with Larry Linville (M*A*S*H*) and Linda Blair (The Exorcist). 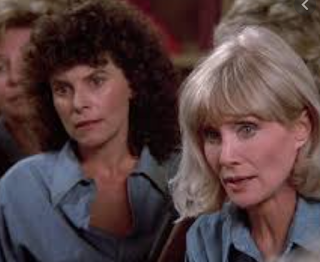 Adrienne Barbeau is in two episodes, and although both are good, "Jessica Behind Bars" is one of the more entertaining episodes of the second season and it's LOADED with guest stars: Margaret Avery (The Color Purple), Barbara Baxley (The Exorcist III), Eve Plumb (The Brady Bunch), Mary Woronov (Death Race: 2000), Diana Bellamy (Critters 3), Yvonne De Carlo (The Munsters), and Vera Miles (Psycho), just to name a few. 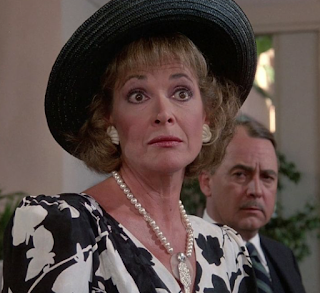 Jessica Walter appears in four episodes, but the best so far is the two-part crossover episode with Magnum P.I.! (Each series got an episode, but you can watch the Murder, She Wrote episode without watching the Magnum P.I. episode.) 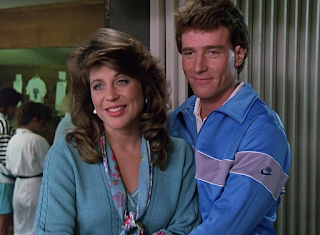 Bryan Cranston and Linda Hamilton star in "Menace, Anyone?" along with Kelli Maroney (Chopping Mall). This episode might have the most over the top performances of any episode so far... 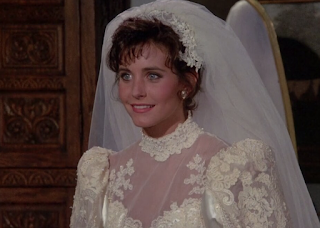 Courteney Cox appears in a two part episode that starts and ends with her character's high-society wedding, but the main plot revolves around a traveling circus featuring Ronny Cox (Robocop) and Greg Evian (My Two Dads). 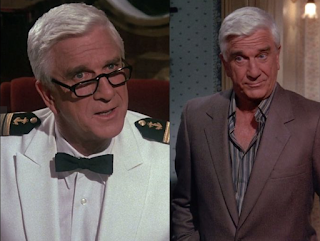 Leslie Nielsen appeared in two episodes, one of which takes place on a cruse ship and features Lynda Day George, Vicki Lawrence, and Jo Anne Worley [see below]. The murder plot in that one asks you to suspend an incredible amount of disbelief, and that's saying something for this show. Vicki Lawrence and Jo Anne Worley are particularly fabulous in their episode "My Johnny Lies Over the Ocean", as was their wardrobe! 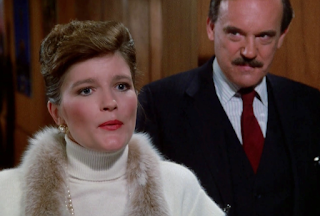 Kate Mulgrew was in three episodes before taking the role of Capt. Janeway, one of which also features Marcia Cross (Desperate Housewives) and Kevin McCarthy (Invasion of the Body Snatchers), and another Mary Jo Catlett (Serial Mom) and David Hemmings (Deep Red). 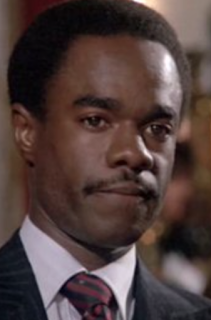 Glynn Turman shows up in three episodes, one of which also features Cameron Mitchell (Raw Force and 242 other things), Garrett Morris (SNL, The Stuff), and Stan Shaw (Monster Squad, and Fried Green Tomatoes). You'd think an episode with Morris and Mitchell would be a fun-filled hamfest, but this one is much more somber than it is zany. 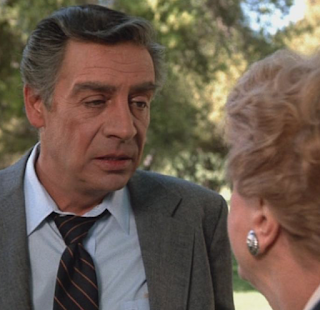 And lastly, as I mentioned at the start, Jerry Orbach appeared in six episodes as an oddly cartoonish private detective character, Harry McGraw. After his third appearance, that character got a short lived spin-off show, The Law and Harry McGraw. After it was off the air, Harry returned to Murder, She Wrote as a re-occurring character.

Of course, those are only the guest stars I've come across so far. Here are a just a handful of the ones I'm still looking forward to: 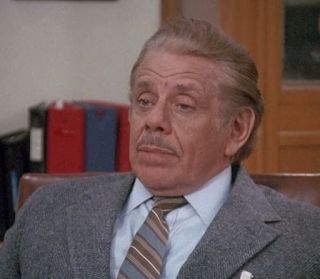 Jerry Stiller apparently shows up in an episode with the director of the movie Popcorn. 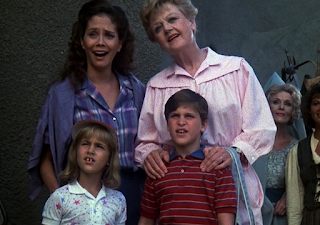 I need re-watch the episode "We're Off to Kill the Wizard" because Kim Darby (Better Off Dead), Richard Sanders (WKRP in Cincinnati) and Joaquin Phoenix are in this one, and I did not notice! 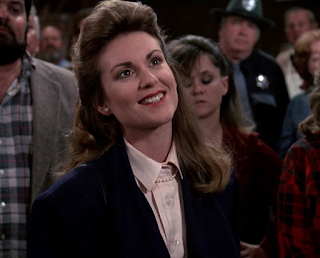 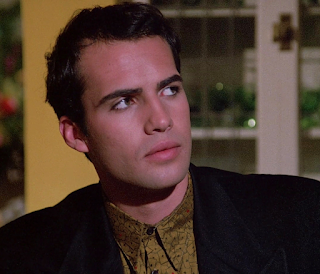 A very young Billy Zane appears in an episode with Kristian Alfonso (Hope Brady from Days of Our Lives), John Saxon (who appears in three other episodes of this show), and Eli Wallach
(The Good, the Bad, and the Ugly). 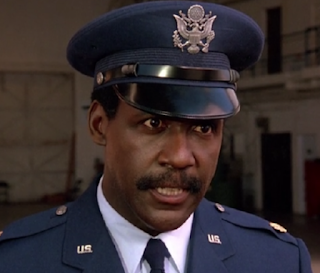 Richard Roundtree's only episode also features
Clifton James (Live and Let Die), so that one will hopefully be fun!

Clue #2: The director of this month's movie wrote and directed it's sequel.

Clue #1: This month's movie is a classic 90s action movie.

Tee shirts, and posters, and homevideo logos, oh my!

If you're ever looking for past Timmonster's designs, you can always find them here!

Clue #3: We have screened three films directed by the director of this month's film, all of which appear consecutively in his directorial filmography.